The Call for Sessions is now open for the 17th annual OFA Workshop, taking place March 15-19, 2021.  It is the only event of its kind where fabric developers and users can discuss emerging fabric technologies, collaborate on future industry requirements, and address problems that exist today.

This year’s technical program will focus on four major themes, or tracks (detailed overviews of the themes and tracks can be found below):

Submit your session proposal via EasyChair: https://easychair.org/conferences/?conf=ofaws2021 Proposals must be received by January 29, 2021, 5:00 PM PST. The Technical Program Committee will respond to proposals by February 3, 2021. We invite you to share the 2021 Call for Sessions flyer with peers and colleagues who may be interested in contributing their expertise to the workshop, as well.

Session proposals are being solicited in any area related to high performance networks and networking software, with a special emphasis on the highlighted topics for this year’s Workshop. In keeping with the Workshop’s emphasis on collaboration, proposals for Birds of a Feather sessions and Panels are particularly encouraged.

Detailed Overviews of Themes and Tracks

Networks and the Convergence of HPC, Big Data Analytics, and AI

This track is intended to address major themes and directions in advanced networks and their applications, both today and in the near future that impact the way networks are designed or deployed.  Examples of topics likely to be addressed in this track include the role of networking in developing and deploying computational storage, the emerging application of network accelerators of all stripes, the emergence of Persistent Memory as an industry trend, and many others. Also included in this track could be sessions devoted to discussion of the requirements placed on networks and network APIs by current and emerging applications.

Evolving Networks in the Commercial World

High performance, low latency networks are often associated with HPC-style applications, but that overlooks the large and growing deployments of these networks in commercial applications such as cloud deployments, the financial services industry, and other segments that rely on high throughput, low latency and scalability.  This directional track is designed to explore the needs for network throughput, latency, predictability, and other network characteristics valued in the commercial space.

This track is designed to allow the community to discuss the technical details of any good network – including specific wire protocols, RDMA-based networks, details of APIs currently in deployment or under development, new extensions to existing networking technologies and much more.

Networking Ecosystem and the Community

The community of people with an interest in networks is broad and in many cases is overlapping.  A great example of this is the OFA’s new Fabric Software Development Platform, which is a program supported by the OFA and its members but is intended to benefit a much broader community including the open source community of which the OFA is a part.  This track is designed as a forum to encourage open communication and the exchange of ideas among all participants in the networking ecosystem.

Other Topics in High-Performance Networking and Computing

Is there a topic you’d like to bring up at the workshop, perhaps one that doesn’t fit neatly into one of the other four tracks?  Try as we might, each year a number of interesting and germane proposals are received that don’t fit squarely elsewhere.  Think of this track as an open forum to discuss and debate new ideas and interesting developments that defy characterization. 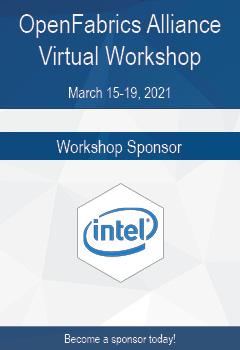